RaVae Erickson1 Comment on A day on the slopes

Well, we started out at T and M’s house and then made two pit stops before finally getting to Keystone. However, my second experience at Keystone was far FAR better than the first. Two years ago it was super icy, but this year it was fantastic! We went to the back mountain where there were fewer people and just had a blast skiing (Hubbin, myself and M’s Dad) and boarding (T and M).

On the way to the back we went down one of the heavily used runs and T got completely taken out by a little girl on skis. He turned one way to avoid her and then she turned right back into him again, so he turned super hard the other direction, but she fell down and started bawling and then he fell down because of how sharp he turned to not run her over. Then the little girl’s mom came over the little ledge (so she had missed the WHOLE thing) and proceeded to yell at T in the nastiest voice ever, “Hey! Watch where you’re going!” It was hilarious and infuriating at the same time because it reality her kid caused the whole scene, not T.

However, when we did get to the back (after that episode) it was GORGEOUS! 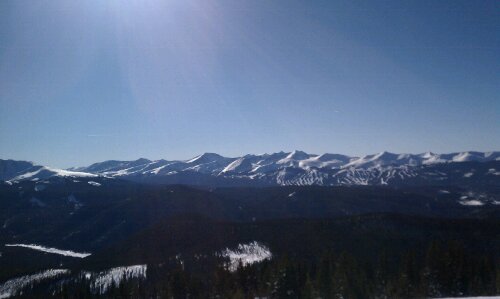 It was SO warm today! My toes were only cold for the last run, which was after the sun started going down.
We had several spills with a broken T, M and Hubbin….T did a superman on the first run. T, M and M’s dad all went down at the same place with T landing hard on his hip. Ah, great stories and good times.